The South Harz Potash District, located in the heart of Germany, was one of the world’s most important Muriate of Potash (MOP) producing regions, with a history of mining going back over 120 years.

Potash exploration in the South Harz Potash District commenced in 1888 near the town of Kehmstedt in the north of Thuringia.  Results from this drill hole proved the presence of potash-bearing salt rocks in the south of the Harz Mountains, resulting in extensive exploration for potash commencing across the region.  In 1897 the Sondershausen mine was established as the first potash mine in the South Harz Potash District.

Historically, potash ores have been mined in the South Harz Potash District by conventional underground room and pillar mining. 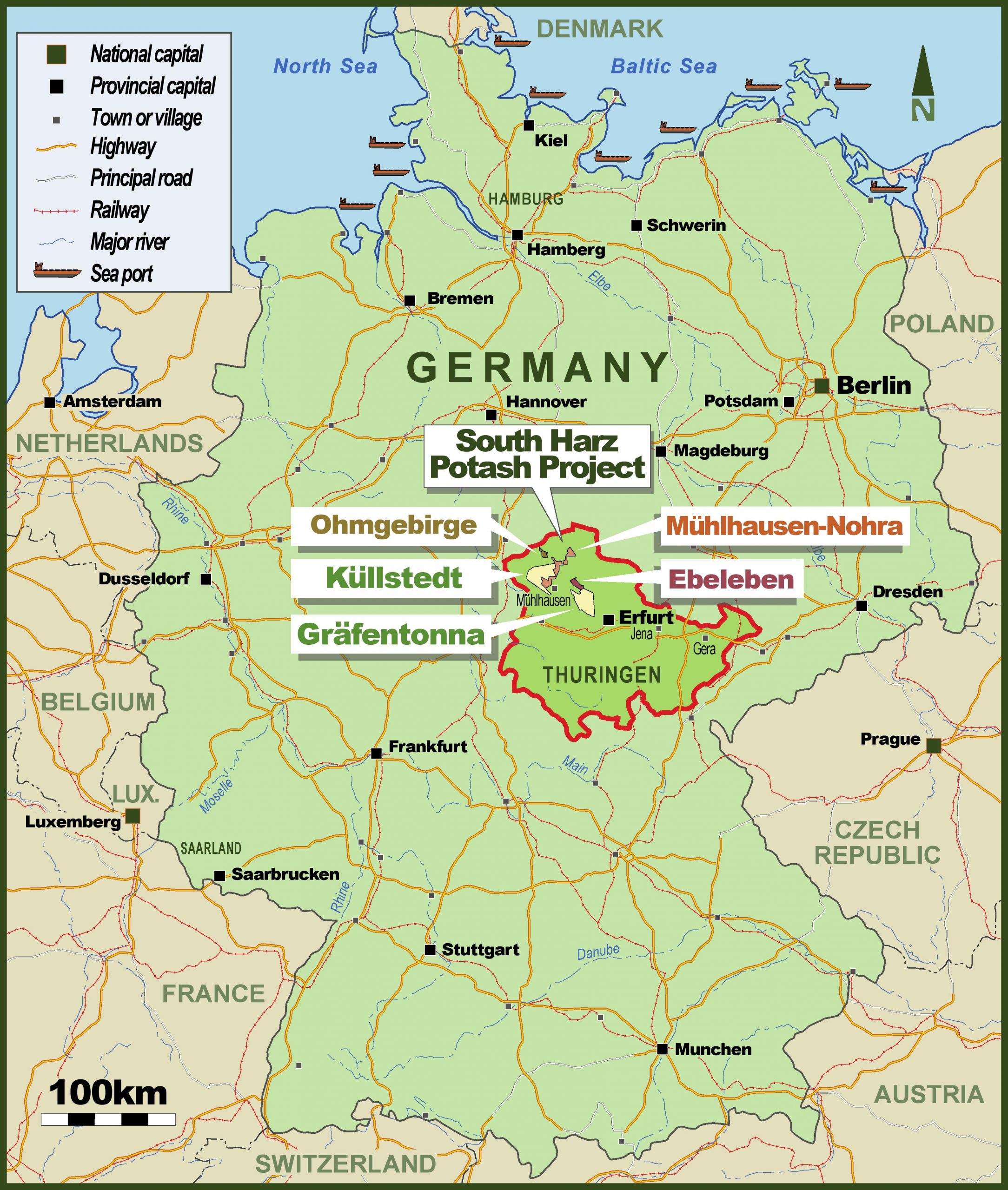 Carnallitite, has a lower percentage of K2O compared to sylvinite and is very brittle and weak and as a result, all underground shafts into carnallite areas are required to be backfilled, as subsidence is an important issue.

Sylvinite is often locally known as ‘Hartsalz’, which is a common miner’s term for potash-bearing evaporite rocks that exhibit a high hardness while drilling due to the mixture of sulphate minerals.

During operation of the South Harz Potash District mines, the GDR was one of the top three producing countries in the world, with a steady increase of produced K2O tonnage from 1,336 kt K2O in 1950 to 3,510 kt K2O in 1988.  The potash mines in the South Harz Potash District contributed approximately 43% of the GDR production (in 1985) with the extraction of the potash ore mainly carried out by conventional underground mining techniques.

Today potash is produced in the South Harz Potash District only from the BWE Kehmstedt operation via solution mining techniques, at a production rate estimated at just over 100,000 tonnes MOP per year.

The project lies within the Thuringian Basin which contains a potash-rich evaporite sequence of Permian age. The potash deposits were formed in the Zechstein Sea, a shallow salty body of water that covered a large area extending from the north of England, to central Poland, and eastern France. The so-called Zechstein Evaporites, which developed at the margins of the Zechstein Sea, have historically been an important source of salts, potassium fertilisers and hydrocarbons in the entire region.

The geology that controls the South Harz Potash seams is the same geological units that contains Sirius Minerals’ Woodsmith Mine and ICL’s Boulby Mine in England and K+S’s potash mines located in the central and northern parts of Germany. Due to the extensive mining and exploration history in the area, the geology of the project area and potash mineralisation is very well known. The evaporite sequence containing the potash seams within the South Harz District occur at depths of between 500m and 1,200m below surface. The overlying rocks consist of a marine sequence of sandstones, mudstones, marl, dolomite and siltstones.

The potash mineralisation located throughout the South Harz District is hosted by the Permian Stassfurt Formation. Within the Stassfurt Formation, the Kaliflöz Stassfurt unit (z2KSt) contains the majority of the potash seams found throughout the entire area. The Kaliflöz Staßfurt is up to 58 m thick. Towards the centre of the evaporite basin, the mineralisation changes from predominantly sylvinitic composition to predominantly carnallitic composition. 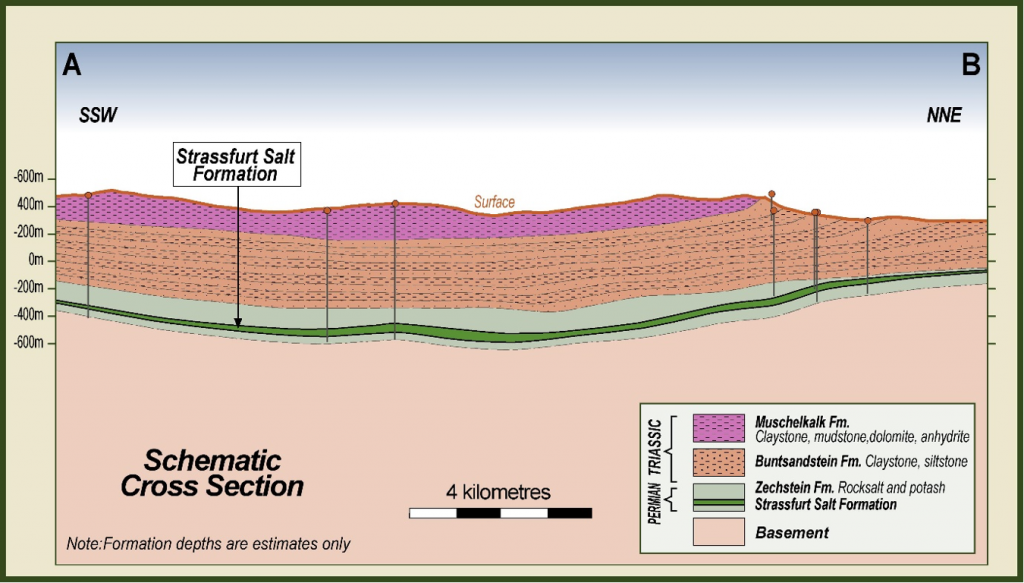 The three perpetual mining licence areas and the exploration licence area Küllstedt have been extensively explored for potash by the state mining company of the former GDR and a vast database of drillholes and technical studies exists to support the geological model. The Gräfentonna licence was extensively explored for hydrocarbons, and much of the existing exploration data is useful for the evaluation of potash.

At the time of closure in 1991, the Volkenroda mine was scheduled to be extended to the east into the Ebeleben Mining Licence area, and shaft sinking for a new ventilation shaft had begun and was at an advanced stage. Similarly, investigations were well underway to extend the Volkenroda mine to the west, or to establish a new stand-alone mining operation within the Mühlhausen-Nohra Mining Licence area which is now held by SHP.

From 2017 to 2020, SHP has focused on evaluating the vast archive of exploration drillhole data and technical studies with the aim of defining JORC 2012 compliant resources together with technical and economic studies for each of the licence areas.

Additionally, SHP’s consultants Micon International Co. Limited, identified a further portion of the Nohra-Elende sub-area as an Exploration Target where the drill spacing was too great to determine an Inferred resource. Details of this exploration target were announced in January 2019 for a target of 638 to 1,162 million tonnes grading at 9.2 – 11.1 % K2O*. 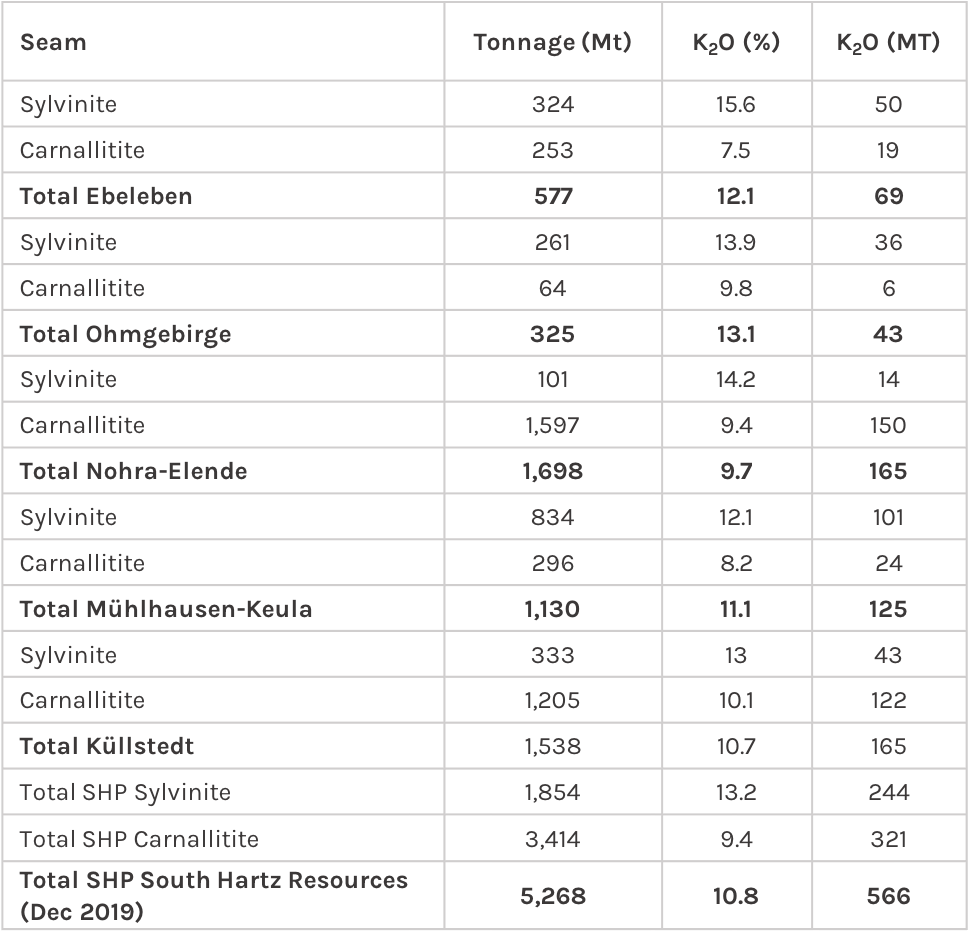 In September 2020 SHP released results of a JORC 2021 MgSO4 or Kieserite resource from the Nohra-Elende Sub area comprising 768Mt at an average grade of 8.1% magnesium sulphate, with intersections up to 20%.

Magnesium sulphate is contained within the mineral Kieserite (MgSO4.H2O) of which 72Mt has been identified. The Kieserite resource was estimated from the database of 92 drillholes in and around the Nohra-Elende licence area.

Natural Kieserite is mined in Germany by the K+S Group, however ore reserves are depleting and a replacement source is required. The only other significant source is China, where magnesium sulphate is manufactured synthetically in a process using hot acids.

Magnesium sulphate can be sold in a pure form, blended with potash (MOP) to produce value-added fertilizers or reacted with MOP to manufacture potassium sulphate (SOP). 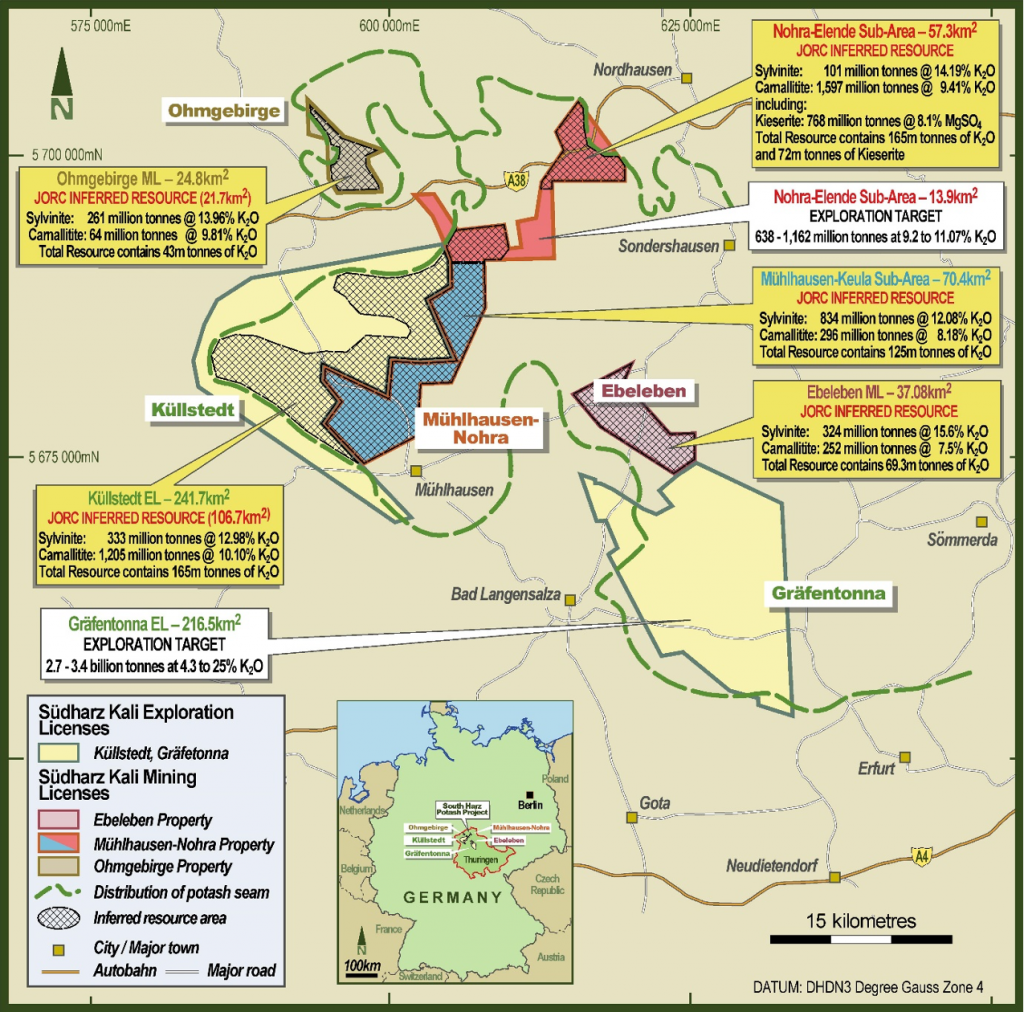 Past mining and exploration within the Küllstedt exploration licence has included three vertical shafts which operated up to 1924 (excised from the tenement), as well as potash exploration drill holes and hydrocarbon wells that have drilled through the potash formations of interest.

Geological data and assay data for the drill holes have been used to develop a 3D geological model of the potash seam and a JORC Inferred resource (ASX release 19 Feb 2019) covering approximately 44% of the Küllstedt exploration licence area. Previous work completed by SHP identified that almost all the Küllstedt licence is underlain by potash, and that the area contains a significant Exploration Target (Davenport Resources replacement Prospectus p30, 19 Jan 2017*) which has the potential to add further potash to SHP’s JORC resource inventory.

Although less geological information is available on the Gräfentonna licence, the stratigraphy is broadly similar to that of the Küllstedt licence, and more importantly the Ebeleben Mining Licence. Based on preliminary data the Gräfentonna Licence shows a sylvinite-dominated potash seam running down the central part of the licence area and a carnallitite-dominated potash seam towards the eastern side of the licence.

A detailed geological review and geological model of the potash seam underlying the Gräfentonna licence using the available drilling and geological information has allowed an Exploration Target to be calculated of between 2,678 and 3,396 million tonnes grading between 4.3% and 25% K2O (ASX release 22 May 2017*).