Our flagship project Ohmgebirge has been identified as SHP’s priority licence area. Ohmgebirge is the smallest licence held by the company, but it is shallow and historical drilling has demonstrated excellent sylvinite grades, within close proximity to existing shafts and infrastructure. This led the company to identify the project as a potentially low-cost, rapid-start project.

Ohmgebirge is located at the north-western extent of the South Harz sedimentary basin approximately 30km west of Sondershausen and 65km northwest of state capital, Erfurt. 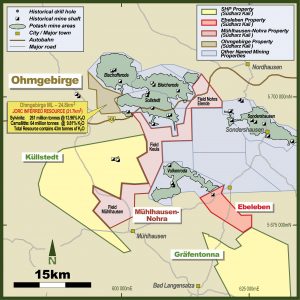 The economic potash deposit covers almost the entire Ohmgebirge mining licence. There is very little variation in mineralogy or grade across Ohmgebirge. Sylvinite is dominant and attains an average thickness of 7.2m. A 15m thick Carnallite unit is seen underlying the Sylvinite in the south-east of the licence area. The potash seams on Ohmgebirge display gentle localised undulations with no obvious dip.

Exploration commenced within the Ohmgebirge licence in 1894 for potash including cored drill holes and downhole geophysics. The area around the Ohmgebirge mining licence is a well-known potash-bearing area and is adjacent to the now closed Bischofferode and the open Bleicherode/Sollstedt Mines. After initial exploration in the early 1900s exploration recommenced on Ohmgebirge in earnest in the 1960’s. All of the later exploration drilling was conducted by the former GDR.

In December 2019 Micon International completed a JORC 2012 resource on the licence area and classified the whole of the Ohmgebirge mining licence as an Inferred Mineral Resource.

A total of 14 historical exploration drillholes (including one deviation) have been drilled within the current Ohmgebirge mining licence area. Additional drillholes located around the Ohmgebirge licence were used for the creation of the project database, bringing the total number of drillholes used for the JORC resource modelling work to 41.

Of the 41 drill holes used in the model, 4 did not intersect the z2KSt potash horizon. Chemical data exists from 27 diamond core drill holes (‘potash drill holes’) that produced core samples and mineralogy is available for 35 drill holes. Holes drilled between 1956 and 1984 were geophysically logged including gamma, gamma-gamma and natural gamma downhole logging. Historical drill hole logs from the 1960’s and 1980’s drilling programmes include graphical logs that show the adjustment to the geology according to the geophysical logging depths.

The drill hole spacing on Ohmgebirge ranges between 970-2,400m with an average spacing of approximately 1,000m. The drill holes are evenly distributed across the property. 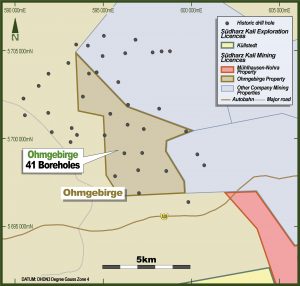 A preliminary technical study for Ohmgebirge identified mining methods and a processing route for extraction of high purity MOP (muriate of potash) and NaCl (salt), with solid and liquid waste to be backfilled into void spaces within the mine, achieving a zero-effluent status.

While Ohmgebirge has a JORC 2012 Inferred Mineral Resource of 325 million tonnes at 13.14% K2O for 43Mt of K2O resource, the company plans to undertake a confirmatory drilling program to upgrade the classification to Measured and Indicated, which will facilitate the release of a previously completed economic study.

The company also plans to undertake a definitive feasibility study at Ohmgebirge.